BULLMASTIFF RESCUERS INC.
Bullmastiffs described in this section are in Forever Foster Homes. They will live in their forever foster homes for the rest of their lives. However, BRI will pay for their vetting and care for the remainder of their time. Because of age and/or medical needs these dogs were considered nearly or fully un-adoptable yet are still able to live a good quality of life. We brought them into our homes to allow them that chance to live a full, happy, comfortable life.
We rely on donations to take care of these deserving dogs. If you can, please consider donating so that we can continue to give these amazing dogs the life they deserve. We are a 501(c)(3) non-profit organization, so all donations to BRI are tax deductible.

​A secure donation link is below at the bottom of the page, or you can mail donations to:
BRI
PO Box 16
​Pottersville, NJ 07979 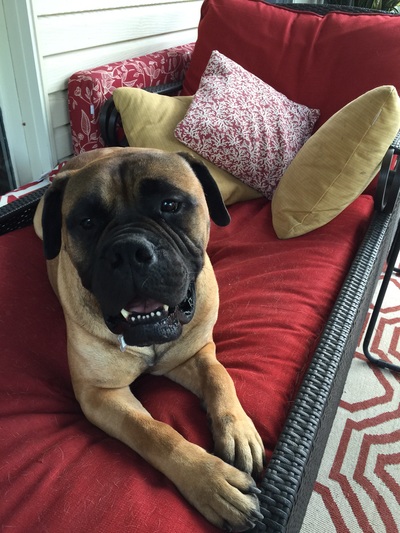 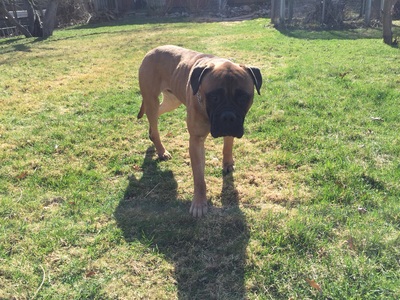 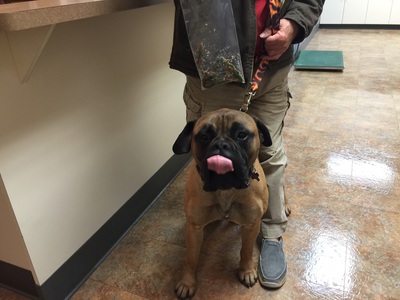 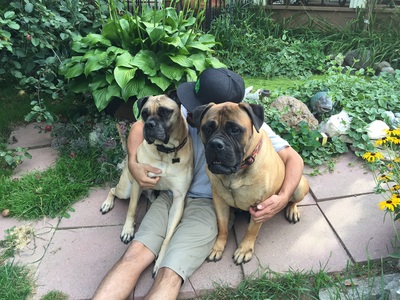 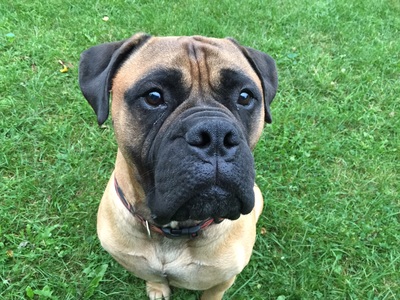 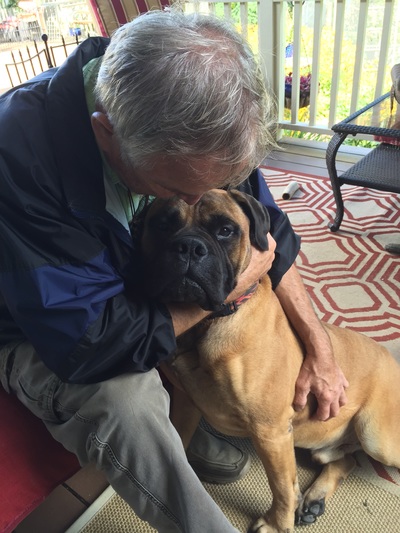 Bart came to BRI, Inc. in early April from Rock Island, Illinois where he had been in a shelter as a stray from November to March.  While in the shelter, he ate a blanket (hence the name, Bart the Blanket Eater) and required surgery.  Upon recovery, he was transferred to BRI, Inc. into foster care.
He has become a “Forever Foster” due to his compulsion to eat non-edibles.  He has eaten at least parts of;  his Kong indestructible bed, collar, parts of fleece blankets/dog beds, my Croc, 24” bungee cord which required a middle of the night emergency visit,  buckles off the hot tub, solar yard lights, Uncle Jonnie’s Bathroom Reader which also resulted in a late night 100 mile round trip vet visit and among other things, the head, arms, ears and bowtie of Astro, our other Bullmastiff’s stuffed toy, which also caused an emergency visit due to the amount of hydrogen peroxide the stuffing absorbed in attempts to induce vomiting.  He cannot sleep on any blankets, rugs or dog beds and has callouses on his protruding joints.
This has been a real learning experience in attempts to keep non-edibles away from him.  He is always surprising us with a new object of his compulsion.  He will test each door or gate by pushing or slamming his nose or paw against it.  He can open cupboards, sliding patio door going in and out when he wants unless we lock it or just knocking the screen out of the door or going through it.  We have come home at night when he has exploded his crate and ate the Republican elephant stuffed toy, throwing it up in, under and around the crate, register, wall and then walked in it with the other three dogs.
Because of Bart’s compulsions and in attempts to keep him alive,  we have developed several “Bartifications”  which are home modifications to keep him safe.  We have gaits in several areas of our home, inside and out.  Bart’s deck with nothing on it is about 3x the size of ours which has all the patio furniture, pillows, cushions, rugs, etc.  Fenced yard, pen and a fortified crate.  He does have a custom made muzzle, but we have seldom used it and just tried to keep everything out of his reach.
We believe that Bart had a difficult prior existence. He weighed 83# when he came to us.  After 4763 calories/day, he now weighs a perfect 104#.  He is petrified of loud sounds, especially gun shots, and runs yelping to the house, opening the door or going through the screen.  His favorite place to sit is either in his crate or in a corner of the kitchen with his back against the wall.  He is getting over that though.
I just heard a news article, that dogs have some of the same DNA as people and suffer from some of the same psychological and neurological issues as people, such as Obsessive Compulsive Disorder and Autism.  I am an Occupational Therapist and work with autistic kids.  I see some of the same characteristics in Bart and treat him as if he were an autistic kid with OCD.  By stabilizing his environment, establishing a consistent routine, structure, feeding him well, pre and probiotics, pumpkin for his gut issues, lots of love and time, along with his deep pressure sensory rubs, which he seeks out and assist in modulating his central nervous system, Bart has not had any vet visits or eaten any non-edibles in several months.    We don’t know if he has been trained or us.  He will still attempt to eat the clothes right off our bodies if we let him.  We can now tell by his facial expression and body language when he gets this compulsion.  We then do the sensory rubs and he melts.
This does not count his poop eating compulsion.   We used to follow him around the fenced back yard to prevent him from eating it, but he sniffs it out, puts it into his GPS while luring us to the far portion of the back yard.  He then runs to get the poop, knowing we cannot catch him, and eats it.  After much medication, reprimands, yelling, running, swinging our arms, throwing apples at him and me falling into a Woodchuck hole and breaking my wrist, we decided we would have to get used to it.  It wasn’t going to kill him.
Because of his “quirks” which would quickly cause his death,  Bart will remain a “Forever Foster” and my husband’s best buddy.  He even goes out with him and helps take care of the chickens.  Though don’t tell Astro, who is just the perfect dog and my best buddy. 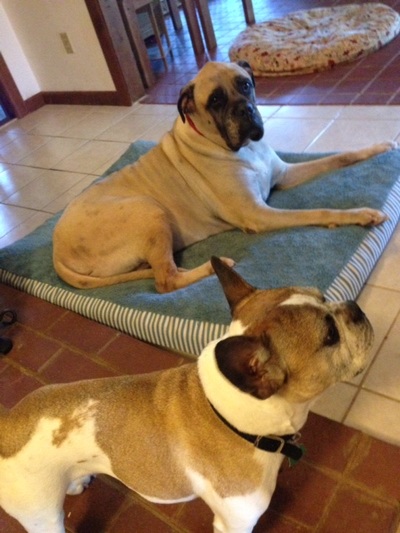 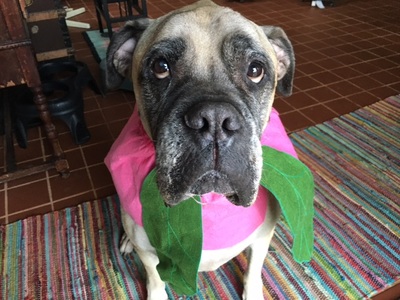 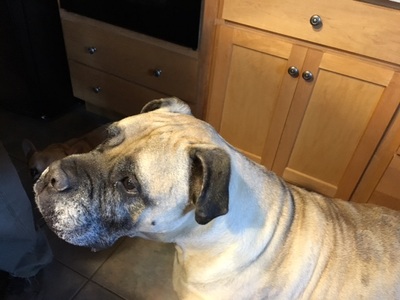 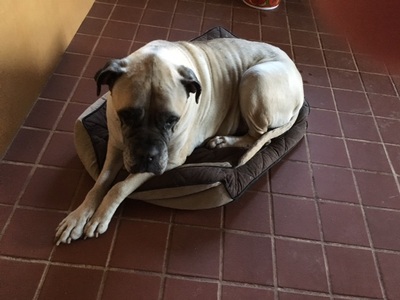 In March 2015, Bella was listed on Craigslist in Kansas City for $75.
Debbie Nash contacted the owner who said she was going back to school
and didn't have time for her.
Sherry Boldt made a detour, picked up Bella and kept her a few weeks until she could
arrange to meet Andrea Kelly. Sherry took her to the vet and updated all her shots.
Andrea brought her to our place April 10. Sherry had trimmed her nails which were still
too long. Her coat showed signs of allergies and her ears looked moth eaten. We have her on
grain free food but her coat has been slow to improve. When she had a urinary infection, the vet prescribed antibiotics saying they would cure the infection and help skin. She gets medicated
baths when needed. Bella will get in the tub on command and patiently wait until her bath is over.
We introduced Bella to Tia, our eight year old French Bulldog who loves everyone. They got along. Within the next two weeks we introduced our other two Frenchies, Zeke and  Louie.
They could all be together. Bella didn't care for our Bullmastiffs, Lola and Tuck. We have baby gates up and shift the dogs around. After six months, Bella accepts Lola but we watch them closely and don't leave them together when we leave the room.
A couple of months after Bella came, we got a Frenchie to foster, Percy. He was raised with other
dogs so we decided to leave the two together when we were home and crated when we were gone. For the next three months, Bella and Percy spent a lot of time together. When Percy was adopted in September, we opted to put Tia with her for company. Bella missed Percy, she was moping around. She also had company when we temp fostered two Bullmastiffs, Shelby and Zephyr. Bella gets along with everyone, even our cats.

Bella is happy when she has a comfy bed and a human nearby. She follows us if the baby gates are open and keeps me company when I telework. She has a place in our hearts and can't imagine her not being with us. 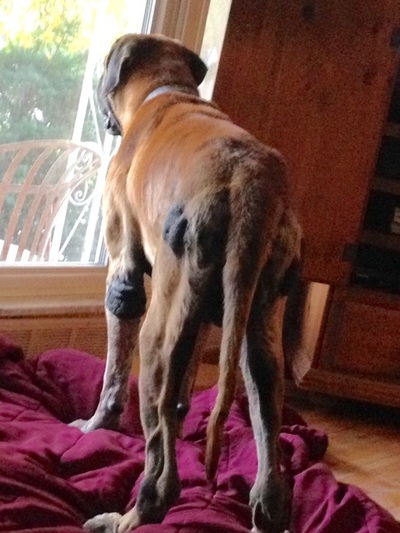 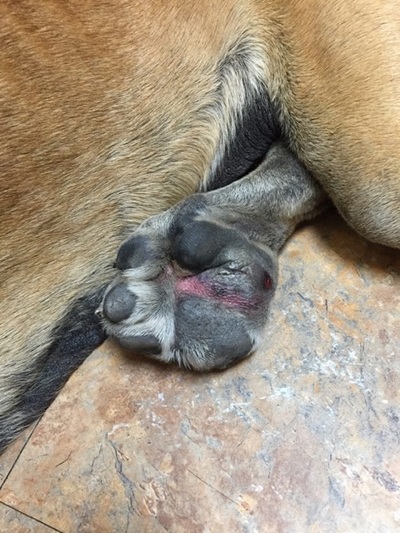 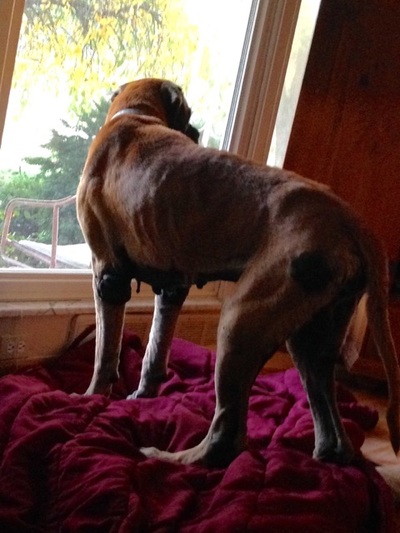 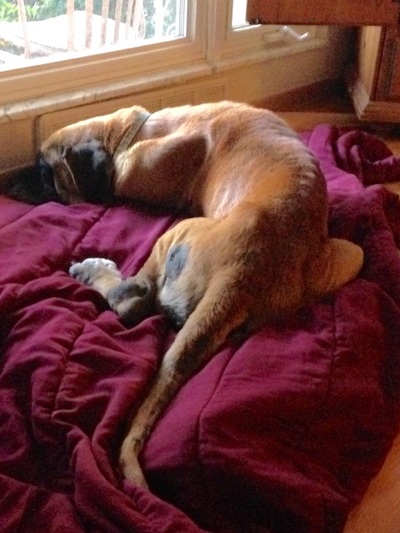 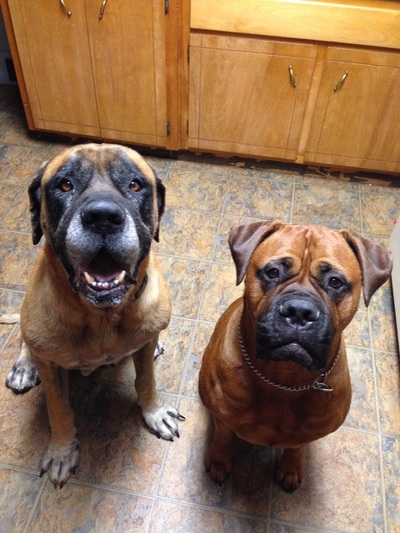 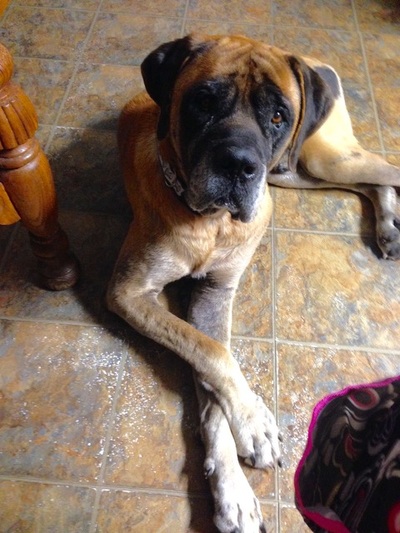 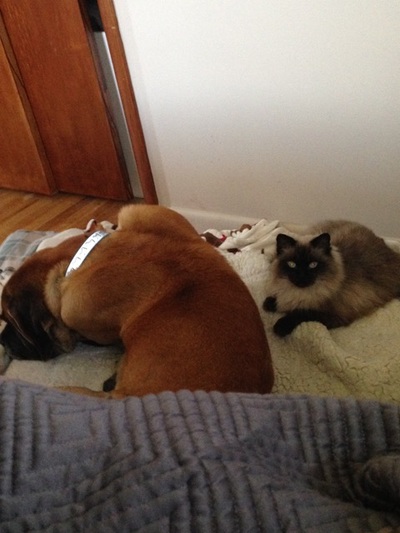 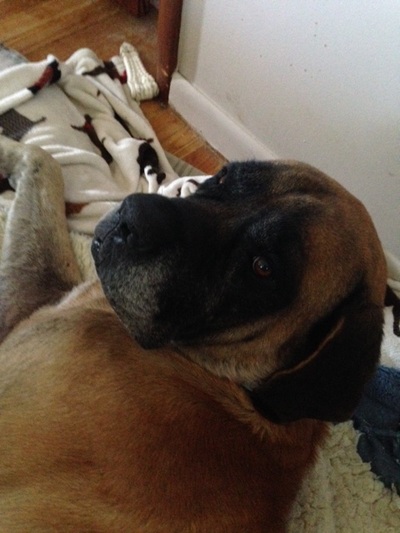 Mojo is a nine year old male who was rescued from Pennsylvania where he lived outdoors on a farm. He came into rescue with Lyme disease, neurological problems plus arthritus in his hips, inter-digital cysts in his feet and celulitis in his foot, horrible bilateral ear infections, and a significant flea infestation plus a heavy intestinal parasite burden. He has huge callouses all over his body from laying outside on the hard ground.  He was represented by his former owner as being “healthy as a horse”…...

Mojo had a difficult first week in rescue with all his health issues but is doing so much better now. Mojo is a friendly guy towards people, other dogs and even cats. He came into rescue very malnourished. He is now eating every thing we give him and is putting on weight. He loves to hang out with us and will rarely leave our sides. He enjoys walks outside and playing with toys while he is inside. He is completely house trained and doesn't need to be crated. We couldn't ask for a better foster dog. He is awesome!

Balboa is a 7 year old mail bullmastiff weighing 110 pounds. He has some mobility limitations which just adds to his personality. Balboa is a very curious dog that gets himself into the most hilarious situations. He loves affection and belly rubs his. Cats are not his favorite friend. Give him a tennis ball or a kong to chew on and he will be your best friend. He enjoys laying in the shade and human watching. Balboa came into care with a lot of unknowns. He has suffered A injury to his left shoulder and his spine which has left him with nerve pain. We don't know anything about how he got the injury because he was brought into care as a stray. In true dog form Balboa is not bothered by all of that he is a very calm, sweet and loving family member. In his current foster home, he is surrounded by children from the ages of 5 to 14 but his calm demeanor or will allow him to be around children of all ages. When the ruckus from the children gets to be too much he will separate himself and go where he feel safe. 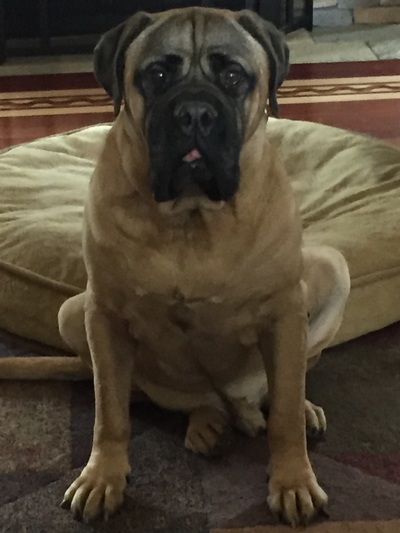 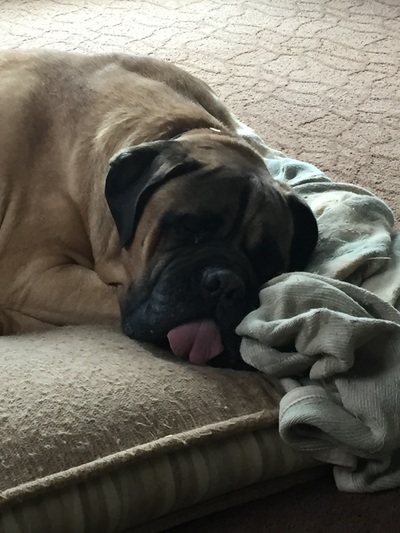 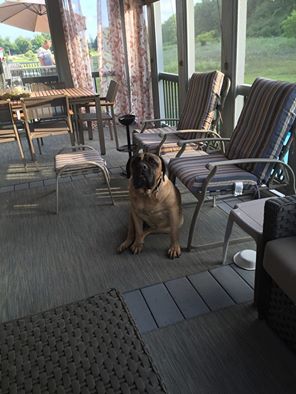 ​I first saw Molly in a Los Angeles shelter right before Christmas 2014. The shelter called me because they said she was good with other dogs and she was very depressed. She had obviously been used for multiple breeding a and then when she got old she was turned out onto the streets. She had lots of lumps and a horrible mastitis. I thought I was taking her to my house for hospice. At the time I also had two young puppies. One who was found at 3 weeks old with his bother and no mother in the high desert. And another bullmastiff puppy who was rescued from being sold as a breeding bitch. I know enough to introduce any new dog to my others very slowly. I guess Molly knew better !! She howled in a crate and howled in the other room. When I went to open the door and have a talk with her she pushed her way through me ( no easy feat ) and into the hall and waded into meet everyone. They have never been apart since that moment. She has helped me raise two puppies into amazing dogs and apart from some tense times trying to get her mastitis under control she has been the most amazing, helpful, loving dog ever. I think she saved my sanity because having two puppies at once can be crazy making. I love that big Mouf to pieces. 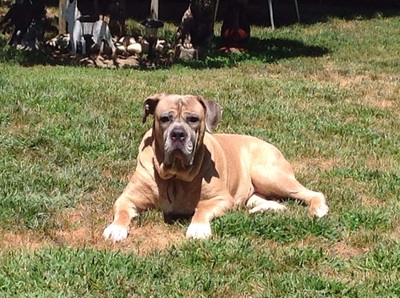 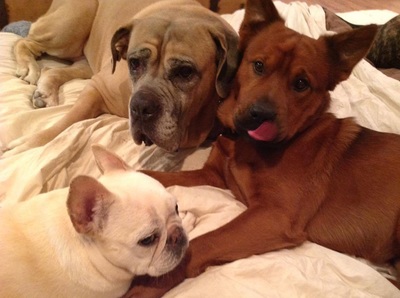 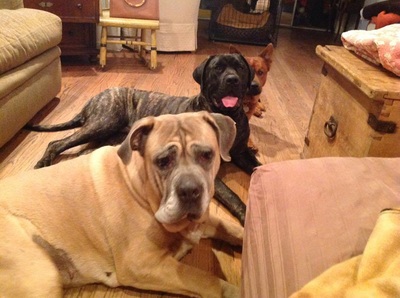 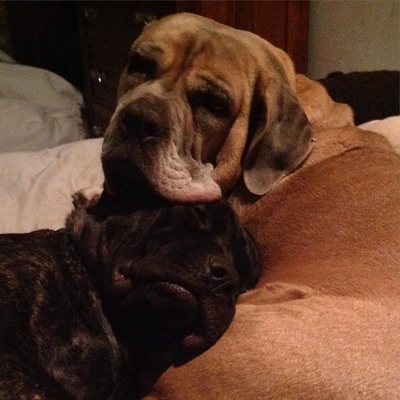 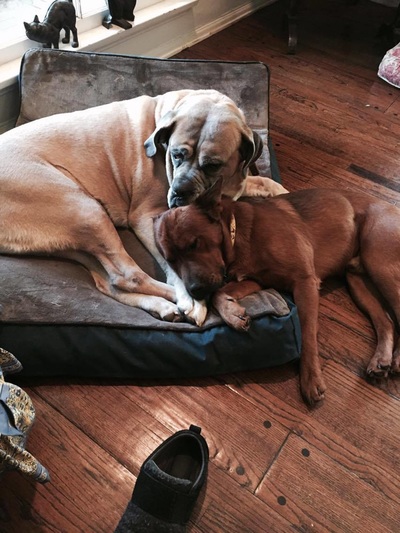 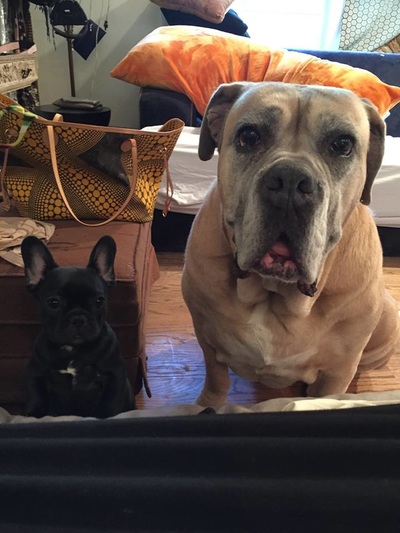 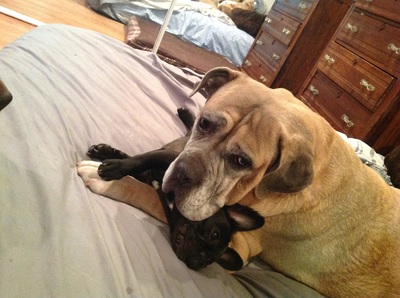 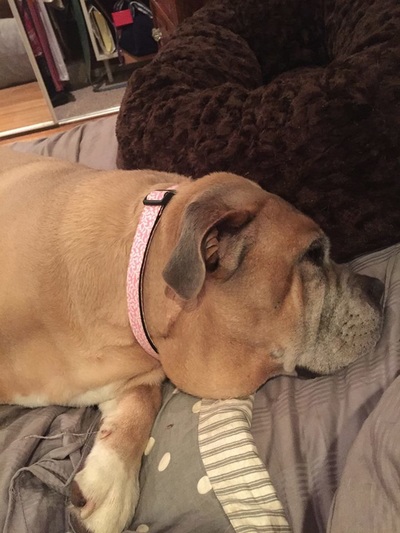